Sky Lattern - A beautiful memory and the beginning of happiness and dreams..

You know that the sky lantern experience is one of the must-dos!  we chose to attend an event that we had never experienced before—the sky lanterns release!  If you've never seen one for yourself, it is really a magical experience that we had thoroughly enjoyed the experience. still fresh in our memory,  Its a carnival like never before with food stalls from all over, a flea market, bands performing, small drum circles where We had insane amount of drumming and had so much fun!, and the grand finale "releasing the sky lanterns". The organizers said, was to symbolize the spirit of the union. and Riseup is an initiative taken for the empowerment of women beedi makers of Adilabad took place at Boulder Hills, Gachibowli. The Hyderabad Sky Lantern Festival 2015, RISEUP is an initiative taken for the empowerment of women and to support Women safety. We are happy to be part and as well got opportunity to contribute bit from our end.
Posted by Malini Mohan Kumar at 7:41 AM No comments: 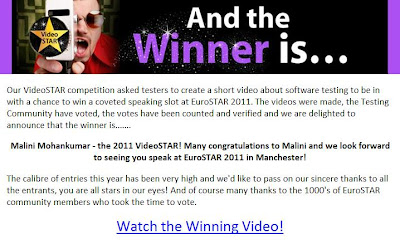 We won the contest and I would like to take here an opportunity to thank each & everyone of you by their name for your immense support. This wouldn’t have been possible without your support. This goes on to prove that anything is achievable when we all put in our efforts together which has been the core concept behind my video. This is a real TEAM WORK.

A special thanks to Family, Friends, my project team, my superiors and my supportive colleagues.

http://www.eurostarconferences.com/content/videostar.aspx
Posted by Malini Mohan Kumar at 9:53 AM 5 comments: 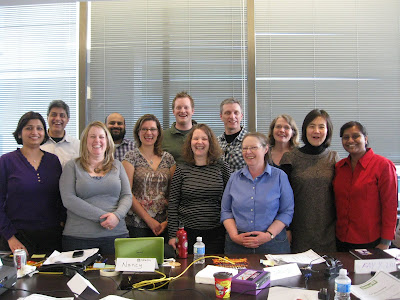 The workshop has created awareness on Software testing estimation process. Enlightening experience now feel I am better at estimation than I was before the workshop.POST Workshop 2011 on the topic "Test Estimation: Perspectives on the Facts and Fictions".Read more @ http://postworkshop.ca/post2011.html 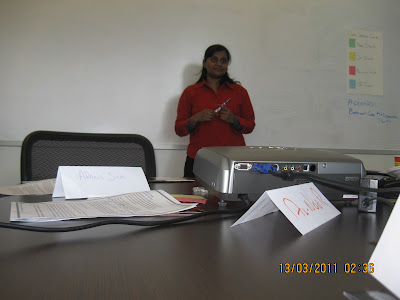 Posted by Malini Mohan Kumar at 10:50 PM No comments:

Its nothing like Live concert isn’t it! Bryan Adams Concert! 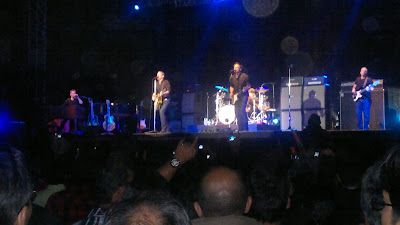 I got back from the Bryan Adams concert. Huge lineup to park the car and get in - like about a half a kilometer long so we just managed to park our car and kept walking all the way up to the entrance and lucky we did and we got to walk right in! But my friends choked when security checked their purse and told them no cosmetics were allowed in the venue - huh?? They made them throw away their cosmetics! I yet to discover the security reason behind it?!!.

Great night, we were far from the stage but we could see him and the band really well. The highlight for me was when he said My name is Bryan. Here I am'. He took off his song 'Here I Am' from that point – The crowd was excited when he just stringed through our ears the first tune of “Summer of 69” everyone got into it and was loud and singing and dancing. Played all the hits “Baby you are gone”, “18 till I die” and some new tunes as well. Bryan Adams singing songs that you and me would have listened more than million times but still listening those songs from Bryan is for sure to get goose bumps.It gave me a great feeling to sing along to the hits from the 90's. The stage was a constant flurry of excitement and completely into the aura of rock music.

The sky was sparkling with beautiful stars here and there and a huge round shining moon. Bryan standing under the cool and beautiful night gray shiny sky and entertaining the crowd. His voice was roared through the miles in the air and I was totally in trance watching the sky, the star, the moon and the rock star, watching him singing, the whole sight was mesmerizing.

Hey Stars! What’s special today? Why are you shining too much? Stop! Isn’t it too much for my small eyes, huh I know they never listened to me. Just I could see another me in them with full packed excitement; All the way they were brilliance, twinkle, glint, radiance, and sparkling along with the rock star Bryan. All the more Bryan asked the 20,000+ crowd to light up their digital mobile and flash over to make the place brighter. Wow! The entire picture was food to the eyes and music to the ears. He sang around 20 songs including “Let’s make a night to remember”, “Please forgive me”, “How do ya feel tonight” “Running to you”- but it was not enough for all of us. 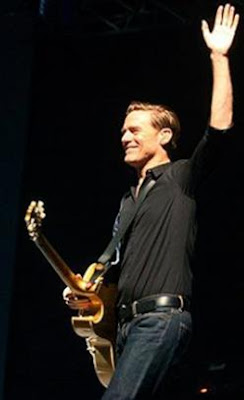 The crowd was kept in a constant trance and was simply electrifying. Bryan kept the pep talk on and trying to communicate to the audience. His light-heartedness was infectious. He has such a unique way of captivating and relating to his audience. I think after this astonishing experience, I now see Bryan Adams with even more respect than I did before. I could see that Bryan Adams’ impact on me and I hold the piece of evidence, that even when you climb the highest ladder of success, you can still remain grounded in your sense of reality. My eyes kept filled with plenty of colorful wonder as the music played on. The hyperactive guitarist scott, who was never at a standstill, wore a path in the floor running back and forth. The light works kept me craving for more.

Everywhere excitement, I noticed that there were bouncers, security guards and traffic policemen posted on every nook and corner. However, they could not do much to stop the madness. Thank God nothing of that sort happened. Bryan said Thanks and goodnight twice asked the crowd to go home but all of us were not ready to leave him. He left his guitar down and stood for a sec looking at the crowd. That was really fun to watch him the way he was teasing his fans. After he gave two more songs and signed off himself saying - Its fantastic night! Good night! God bless. The mood was ecstatic and upbeat throughout the show. I enjoyed every moment of the show and shouted madly . It proved to be a big treat for all the fans of Bryan Adams. 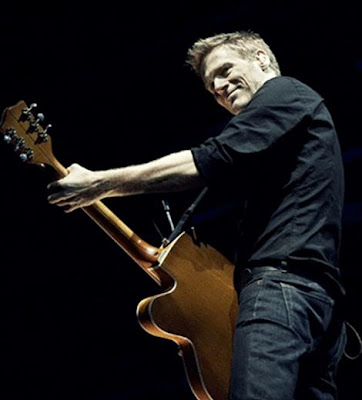 What a start of 2011 year! Hearing Bryan sing live was the experience of a lifetime. The concert was one of the most electrifying and enjoyable moments of my life. The feeling of being in a world of rock music was just amazing. The event was worth the experience which I will remember for days to come.
Posted by Malini Mohan Kumar at 12:01 AM 4 comments: 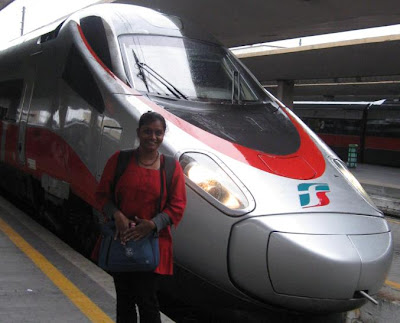 QaTest conference was a very good experience and one of the best events I have been to. Even got an opportunity to present a paper. The atmosphere was friendly, so nobody was scared me :). I'm still in contact with some of the delegates I met there. The organisation of the conference was impressively professional. 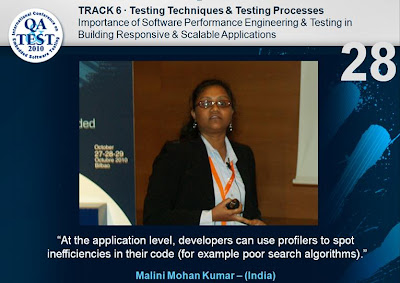 I'm looking forward to hopefully going back there in 2011. It was a wonderful, inspiring experience and I got a lot of precious feedback. The conference was also very well organized - I enjoyed taking part in useful sessions attending very interesting and impressing the beautiful city of bilbao as well as meeting old friends Seniro executives and getting to know new ones. I hope we will all meet again at 2011 conference! 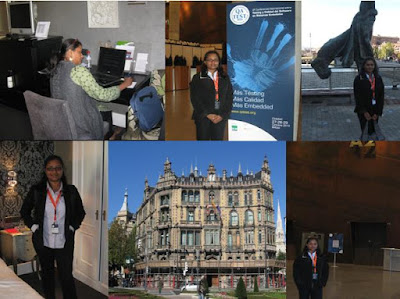 Posted by Malini Mohan Kumar at 2:58 AM No comments:

Memorable Night of my Graduation day

It was a nice winter evening with a beautiful decorated lawn, soft music playing in the background set the perfect mood for a star studded evening. The highlight of the evening was the grandeur of convocation and moments that captured with our hats flying in the air. 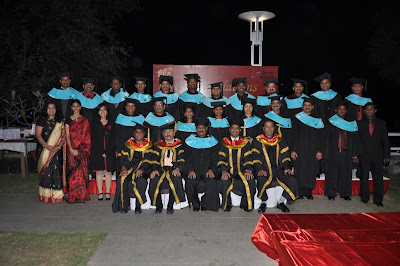 I truly feel obliged and honored being a part of Senior Leadership flag-manship program. I would like to thank everyone for being the supporting pillar in all the ups and downs during this wonderful journey. 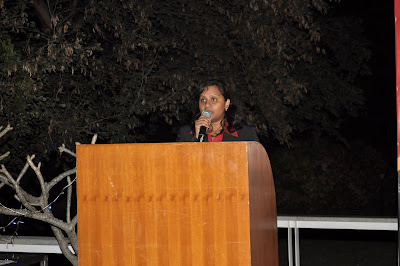 I have got an opportunity to deliver a vote of thanks and it was my pleasure to deliver the vote of thanks to all who have helped make this event such a success. Four months has passed so quickly but I still vividly remember all the moments. I will be cherishing the moment forever. 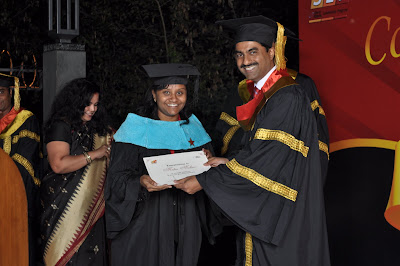 Posted by Malini Mohan Kumar at 11:13 PM No comments: 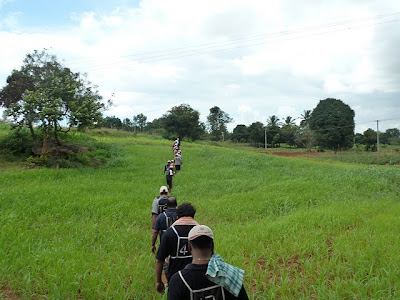 Recently I have attended a leadership development training that is unmatched by any other program that i have attended so far. It was absolutely refreshing after many days sitting in A/C room.
We went to Pegasus training institute Bangalore and it’s a typical military campus where discipline plays a major role. We were 20+ leaders/managers put up in the 3 days camp. We have got down in the railway station and Pegasus Vehicle came down to pick us up. The Vehicle started moving towards to bad muddy roads and the dark way surrounded with dense bushes, It was absolutely looks like forest. After many days I saw Sun Raise and Sun Set. 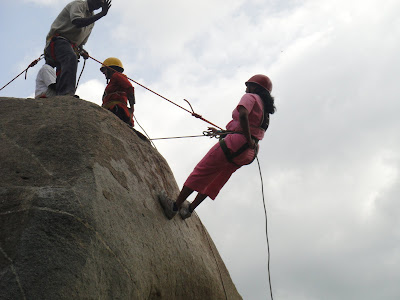 The colonel Nagaraju was training all of us. All the three whole days we have put up under activities and different games. The games are fun to be played at the same time it taught us the importance of communicating the goals and objectives, how to involve your team in the goal-setting process, specifically as a leader we need to know team members ideas and How do we fine tune these ideas and produce the highest quality product. The most important aspects is that when the final results are successful, as a leader make it a team success rather than just all your own. 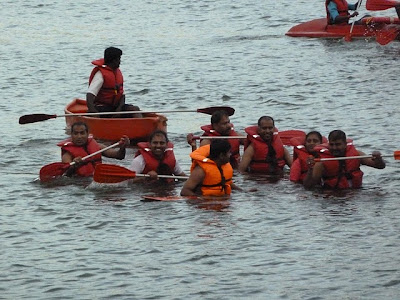 All the games are designed to represent the basic business environment. Especially IT industry environment has conflict and certain situations foster it. We all want to see conflict end positively and as a "win-win" for all parties involved but when we are in the real conflict situation as a human we bring all our hidden emotions played around us. So how to control those unwanted emotions and focus on the particular situation to solve the issue. Mainly I have learnt that - To be a successful manager, one should be empathetic in helping your team members work through their problems. It is also vitally important to have good listening skills. We must hear them out so that they can feel and say that they have been heard. 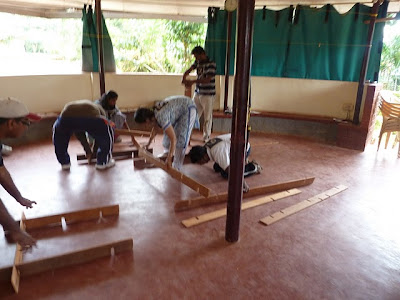 Even more important, you want to be decisive in your responses going forward for two reasons:To bring closure to the situation. To inspire your team’s confidence with your decisions and for following your lead in the future.
Posted by Malini Mohan Kumar at 9:55 AM 1 comment: